It was discovered by drilling two holes into a combined EM, magnetic and gravity anomaly that extends for 1km north to south, up to 200m wide. At the south end of the anomaly is the known Jack Pine kimberlite discovered in the 1990s by drill testing a distinct magnetic anomaly, negatively polarized.

Buddy Doyle VP Exploration said, “I was there in the early days of the Lac de Gras kimberlite discoveries managing Rio Tinto’s exploration team. The kimberlite exploration model assumed that kimberlite formed vertical “carrot” shaped bodies. There were hundreds of negatively polarized magnetic lows to be tested so we dropped a drill hole or two to get a sample, assumed they were carrot shape, and moved on.”

Mr. Doyle continues, “but of course models are a generalization and we soon found bodies that had complex shapes and we saw examples of multiple kimberlite events forming larger complexes. The EM, gravity, and mag signatures at Sequoia suggest this is what we have here. Our drilling has now confirmed that this known kimberlite is only a smaller part of a much larger complex.”

The discovery drill hole DG2021-04 reported earlier was centered on a gravity and EM anomaly. The second hole was targeted 240m to the north on another part of the gravity anomaly where it bends. It was drilled on land at a bearing of 2950 with a dip of -600, intercepted kimberlite at 31m, and exited at 88m.

Although further drilling of the Sequoia Kimberlite Complex is warranted, in order to test as many drill targets a possible during the spring exploration season the drill is now moving to the Kong target where a distinct EM anomaly exists between the known Kong E and Kong W kimberlites. 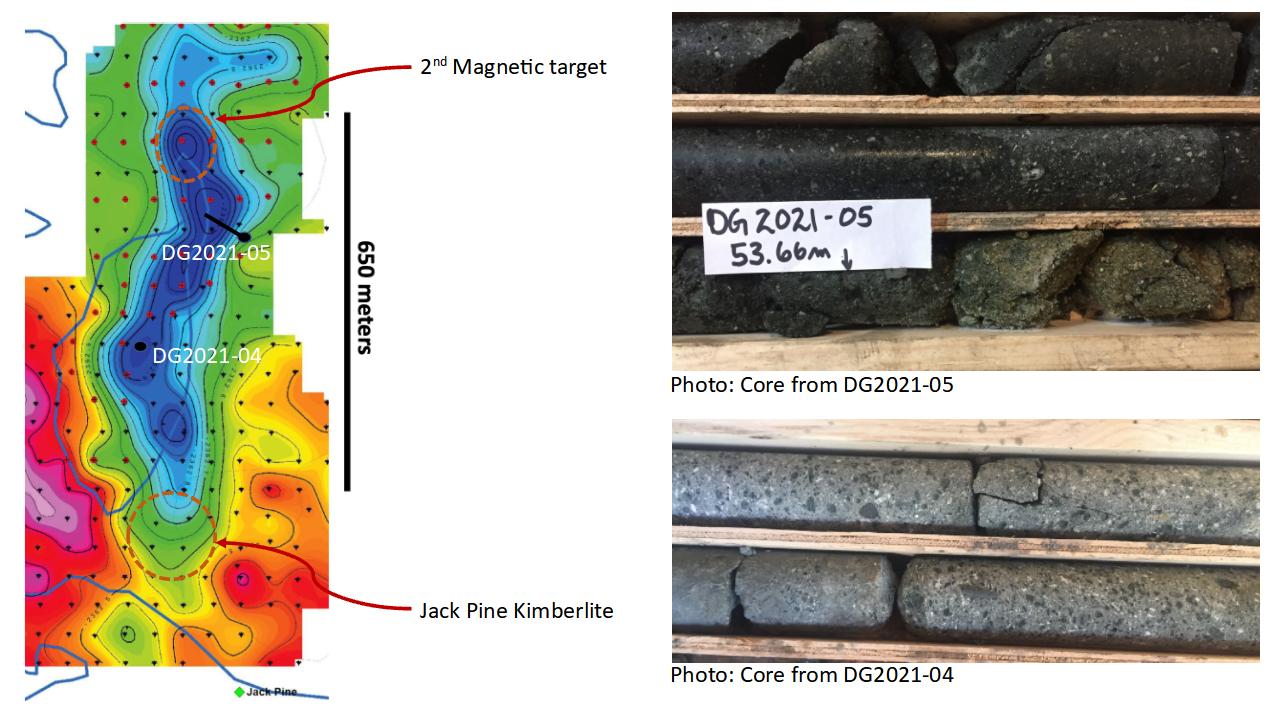 Figure 1: Left, An image of the gravity anomaly at the Sequoia Kimberlite Complex. Note the assumed location of the Jack Pine kimberlite as determined by the magnetic anomaly. Note the little green diamond with Jack Pine written next to it is the location according to the government database. The two drills holes by Arctic Star confirm the gravity anomaly represents kimberlite and confirms the existence of the Complex. The second magnetic target was possibly drilled in the past but there is no record and land use records suggest a permit was applied for. Right: Photographs of typical core, top DG2021-05 and bottomDG2021-04

The Qualified Person for this news release is Buddy Doyle, AUSIMM, a Geologist of over 30 years’ experience in diamond exploration, discovery, and evaluation. A Qualified Person under the provisions of National Instrument 43-101.

Arctic Star has commenced exploration in Lac de Gras NWT on its Diagras Diamond Project next to the producing Diavik & Ekati diamond mines. The Company also owns 100% of the Timantti Diamond Project including a 243 Ha Exploration Permit and a 193,700 Ha Exploration Reservation near the town of Kuusamo, in Finland. The project is located approximately 550km SW of the operating Grib Diamond Mine in Russia. The Company also controls drill ready diamond exploration properties in Nunavut (Stein).