May 6, 2019 – Vancouver, British Columbia – Arctic Star Exploration Corp. (“Arctic Star” or the “Company”) is pleased to announce that its Spring exploration program has been successfully completed at its 40% owned Diagras Property (“Diagras” or the “Property”) located in the Northwest Territories, Canada. Diagras totals 22,595 Hectares within 31 mineral claims with a total of 23 known kimberlites. The data from this ground geophysical program has been received and interpreted by our technical team and they report the work has generated compelling drill targets.

The exploration program consisted of ground Gravity, Magnetic and Electromagnetic (EM) surveys focused around historically identified kimberlites as well as other airborne geophysical anomalies with kimberlite like signatures.

Margret Lake Diamonds Inc is a contributing Joint Venture (the “Joint Venture”) between the Company, which acts as project operator and holds a 60% interest, and Arctic Star Exploration Corp. (TSX.V: ADD) which holds a 40% interest. Diagras is located in the prolific Lac de Gras diamond field, Northwest Territories, Canada just 35 km from the world-class Diavik diamond mine. The Property lies directly on trend with the Diavik deposits currently being mined by a joint venture between Rio Tinto and Dominion Diamond Diavik.

Detailed, modern ground geophysical techniques are being employed to define possible additional kimberlite(s) or kimberlite phases not identified by previous explorers, who did not utilize all these techniques. This exploration approach has been successful elsewhere with recent examples including the discoveries of additional diamondiferous kimberlite at the Kelvin and Faraday kimberlite complex (Kennady North project adjacent to the Gahcho Kue’ Diamond Mine). Investors are cautioned that mineral deposits on adjacent properties are not indicative of mineral deposits on Diagras.

The work has been funded in part by significant grants from the Government of the Northwest Territories (GNWT) Mining Incentive Program (MIP). The Company would like to thank the GNWT for their support and recognition of the potential for this quality exploration program, the funding is limited and only granted to those projects judged most likely to bring benefit to the NWT. Our companies are grateful for their consideration.

The Joint Venture has conducted ground geophysical work over three spring seasons and now has enough drill targets to justify drill mobilization, planned for spring 2020. The Diagras project has an active Class ‘A’ Land Use Permit which includes drilling. The permit is good until December 2022 and has the ability for extension.

Below is a review of some of the more promising targets generated from this work:

At the Black Spruce kimberlite, Monopros (a subsidiary of De Beers) discovered this kimberlite by drilling a distinct magnetic low in the early 1990’s. In the early 2000’s the property was optioned to Majescor, which drilled the edge of the magnetic kimberlite testing in part the EM anomaly. Our work in 2017 shows a series of gravity lows occur coincident and adjacent to the south of the known magnetic kimberlite phase. One of these gravity anomalies clearly breaks and disturbs a diabase dyke signature, which is a characteristic similar to many known Lac de Gras kimberlites. Results from this year, 2019, show a strong EM anomaly that is partly separate and partly coincident with the magnetic and gravity anomalies. The simplest explanation is that each geophysical signature, the Magnetic, the gravity and the EM represent different phases of the same kimberlite complex. Each phase can have totally different diamond grades and populations. The gravity and EM anomalies require separate drill testing. Three separate targets exist.

At the Suzanne kimberlite, ground geophysical work has revealed a magnetic low anomaly, a gravity anomaly and a linear EM anomaly interpreted to be over 600 meters in length. Data in the public domain indicates that only one drill hole tested this kimberlite leaving potentially untested kimberlite(s) and/or phases.

At the HL02 Kimberlite DeBeers drilled 2 long inclined holes one intersecting only a few meters of hypabyssal type kimberlite at the end of the hole. See Figure 2. It appears from this work that there is an untested gravity and EM target that breaks a diabase dyke. This is a classic compelling kimberlite drill target. 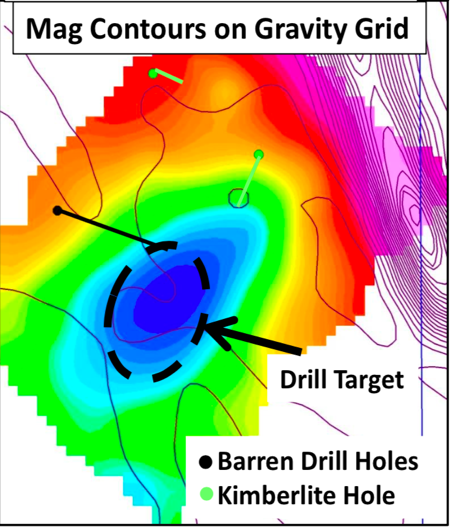 At the Kong Kimberlite shown in figure three is a double lobe magnetic anomaly drilled by Monopros however our work shows a distinct EM anomaly between the two lobes that has not be tested which could represent a new kimberlite or kimberlite phase. 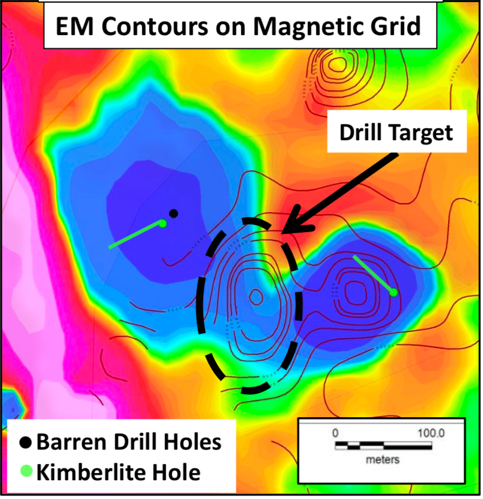 At the Penelope Kimberlite target Figure 4 shows that there is an untested southern EM anomaly that could be caused by an untested kimberlite phase. 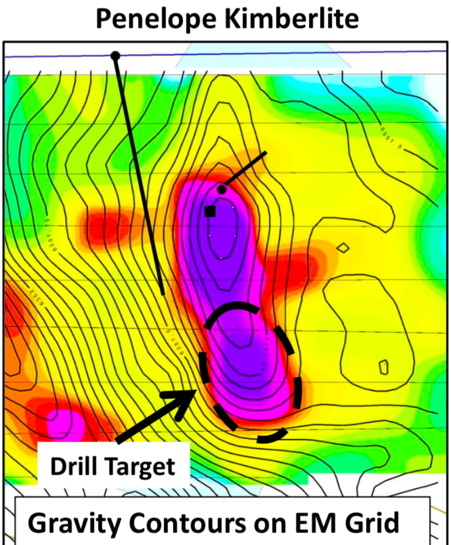 Figure 4. Ohm Mapper resistivity results 50m slice for the Penelope kimberlites suggests there is an untested kimberlite phase in the south. Black lines and dots depict drilling by earlier explorers.

The company still has kimberlites that have not been covered by gravity and EM surveys, including the known, Anne, Tabatha, Finlay, Don, Drew, George, Emily, Don and Krista kimberlites. Given the high target generation success rate proven by our work to date, these remain a priority. This work can proceed at the same time as the planned drill program. It is important to note that the JV has obtained all the permits to conduct this drill program.

The technical data in this news release has been reviewed and approved by Buddy Doyle, a diamond geologist with over 30 years of experience, a Qualified Person under the provisions of National Instrument 43-101.

The Company owns 100% of the recently acquired Timantti Diamond Project including a 1171 Ha Exploration Permit and a 193,700 Ha Exploration Reservation near the town of Kuusamo, in Finland. The project is located approximately 550km SW of the operating Grib Diamond Mine in Russia. Arctic has commenced its exploration in Finland on the Timantti Project, where four diamondiferous kimberlite bodies may represent the first finds in a large kimberlite field. The Company also controls diamond exploration properties in Nunavut (Stein) and the NWT (Diagras and Redemption).