The results are given below in table 1 along with the previous results for comparison.

Notes for Table 1: The Sequoia caustic fusion results were processed through SRC laboratories of Saskatoon. The core was hand split and bagged in approximately 8kg samples to fit geological intervals where possible, the first half of the core was sent and processed, then the second half of the core was sent using the same sample intervals. Both samples were sent by chain of custody, SRC is an independent lab and is SO/IEC 17025:2017 accredited. Samples are placed in a kiln and heated to 5080 with caustic soda for 24 hours. The residue is hot poured through a 0.075mm sieve, then further chemically treated if required until just the refractory minerals remain including diamonds. The residue is sized by sieving and then the diamonds are selected by a mineralogist. Larger diamonds (>0.5mm) are described and weighed. Those above 0.3mm are photographed.

The results are from the 6 holes completed into Sequoia in spring 2022, 5 of which encountered kimberlite. The holes are part of a delineation drilling program designed to define the size, shape, geology, and tonnage of the Sequoia Kimberlite complex. In this program, three holes are drilled from one collar, with the collars being spread approximately 200m apart, with scope to infill up to 100m centers. At each collar a vertical hole is drilled to the assumed center of the kimberlite, this will continue to 250m depth or when it exits the kimberlite. The rig is then tilted and spun, to drill an inclined hole to the east and then a hole to the west. These holes are designed to capture the edge of the kimberlite. Further drilling planned for 2023 is required to complete this first past delineation program. The geophysical signature of the complex is at least 800m long and the holes reported here are from the southern 200m.

Remarkable is the consistent descriptions of the stones being overwhelmingly clear and white from the SRC lab and this continues with the 2022 results. Photographs of the >0.3mm stones (28 pictures) can be viewed here. If this trend continues into the larger commercial stones it bodes well for a higher than average prices for the Sequoia diamonds. Average prices of commercial diamonds in the Lac De Gras field are highly variable (From $USD 30/ct to $USD 450/ct), from kimberlite to kimberlite. The coarse distribution, predominance of white clear stones, the high population of type 2 stones, and the concurring indicator mineral chemistry are layers of evidence that this is achievable. A larger sample with >1000ct of commercial size diamonds will be required to confirm this. This sample is planned for the 2024 Winter Road.

The geological observations from each hole report three main rock types, a Coherent Kimberlite, a Volcaniclastic kimberlite, and a transitional kimberlite between these two types, a review of the diamond tenure of each rock type and their distribution is underway and will be reported when completed.

Planning and budgeting are underway for the 2023 program. 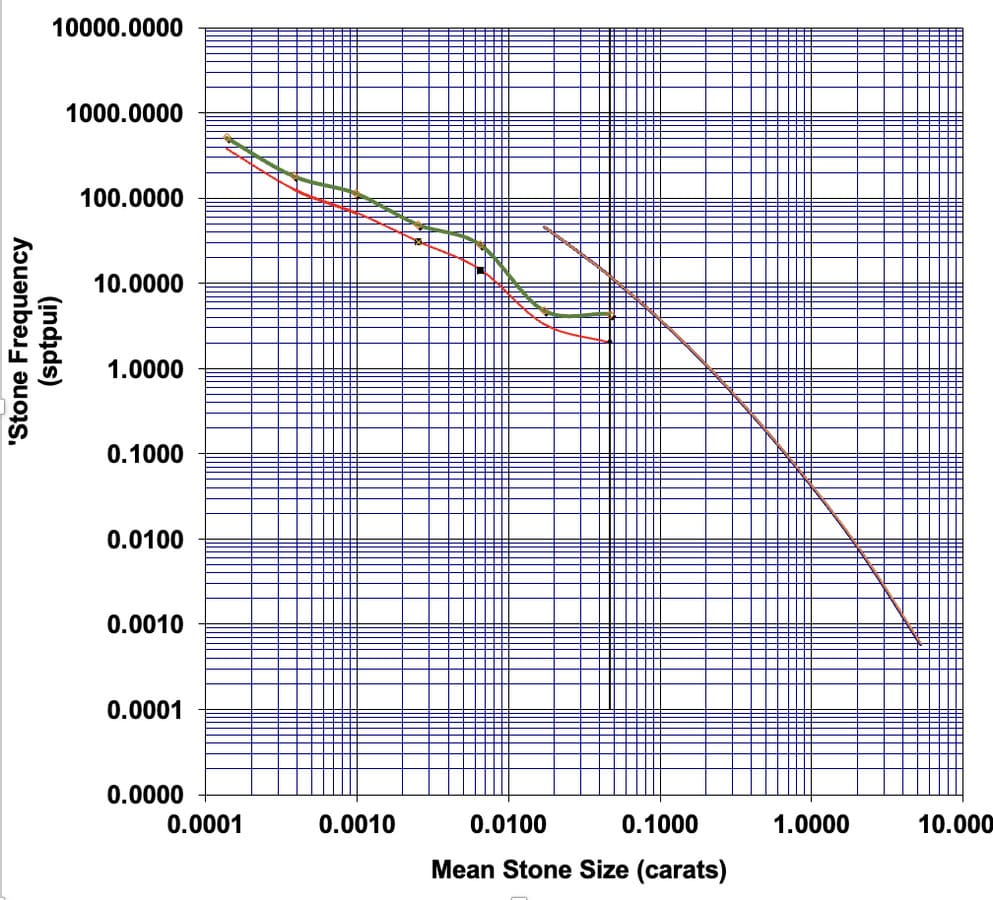 Figure 1: The green line is Sequoia 2021 results and the red line is Sequoia’s total combined results. The red curve to the left is for guidance a 1ct/t grade curve with an average gradient. Note that it appears the lower gradient Sequoia curves will converge on this line at large stone prices.

This news release contains “forward-looking statements” including but not limited to statements with respect to Arctic Star’s plans, the estimation of a mineral resource, and the success of exploration activities. In this release, it is not certain if the kimberlite discovered will be economic or not as this depends on many factors. Forward-looking statements, while based on management’s best estimates and assumptions, are subject to risks and uncertainties that may cause actual results to be materially different from those expressed or implied by such forward-looking statements. There can be no assurance that such statements will prove to be accurate, as actual results and future events could differ materially from those anticipated in such statements. Factors that could affect our plans include our potential inability to raise funds as intended, and in such event, we may require all funds raised, if any, to be used for working capital rather than the intended uses as outlined. Accordingly, readers should not place undue reliance on forward‐looking statements. Arctic Star undertakes no obligation or responsibility to update forward‐looking statements, except as required by law.