Vancouver, British Columbia – Arctic Star Exploration Corp. (“Arctic Star” or the “Company”) (TSXV: ADD) (Frankfurt: 82A2) (WKN: A2DFY5) (OTC: ASDZF) is pleased to announce it has staked and filed 27 new claims on the Diagras project where it is the operator.

The Diagras project is a Joint Venture between Arctic Star and Margaret Lake Diamonds Inc. (“DIA”). Arctic Star took over management of the Diagras project this year and proposed a $2.1 million “spring 2021” budget to drill geophysical targets on the property. At the end of this budget period, July 31st, 2021 the ownership will be approximately 80% Arctic Star, 20% DIA.

The new ground includes the previously discovered PL01 kimberlite, making the total of known kimberlites held in the project area to 24, which has now been increased to 29 with this season’s new discoveries.

Buddy Doyle VP Exploration said, “I led the team that discovered the PL01 kimberlite back in the late 1990s when I was with Rio Tinto. The ground was previously held by another explorer and the PL01 kimberlite was obviously missed. This experience added to our confidence that Arctic Star might find more kimberlites in this area and our five new kimberlites this spring have bolstered this confidence.” Mr. Doyle led Rio Tinto’s North American diamond exploration for 13 years, prior to joining Arctic Star. 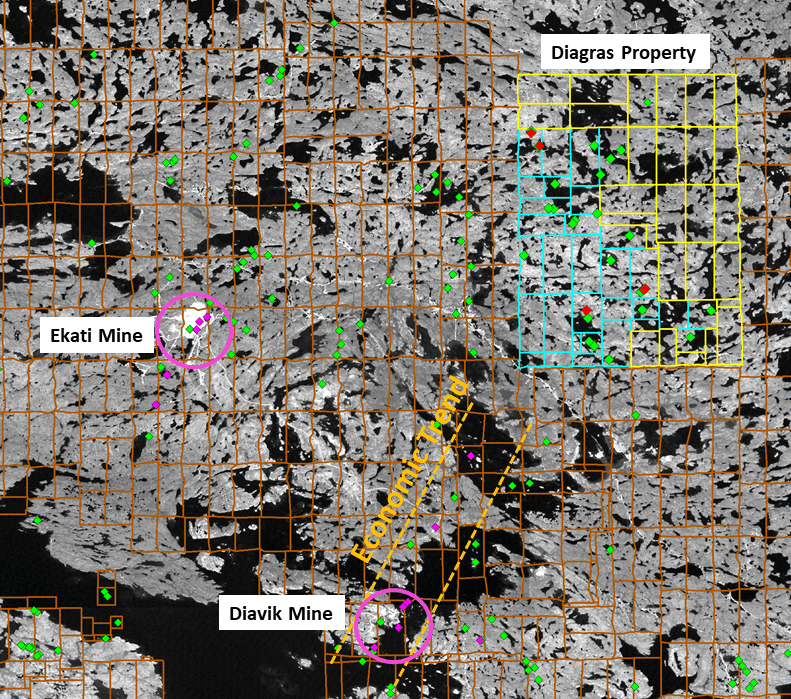 The company plans to fly EM time domain and magnetic surveys, a method that did not exist back in the 1990’s. New filters and ways of integrating the data can highlight the kimberlites especially in areas with noisy backgrounds. The time domain EM data can be modeled in three dimensions which helps discriminate conductive lake sediments and country rocks from the kimberlites.

Arctic Star is predominantly a diamond explorer who has commenced exploration in Lac de Gras NWT on its Diagras Diamond Project next to the producing Diavik & Ekati diamond mines. The Company also owns 100% of the Timantti Diamond Project on which erred several diamondiferous kimberlites have been discovered held under two exploration permits totaling 943 Ha near the town of Kuusamo, in Finland. The Company also optioned drill ready diamond exploration properties in Nunavut (Stein).