Vancouver, British Columbia – Arctic Star Exploration Corp. (“Arctic Star” or the “Company”) (TSXV: ADD) (Frankfurt: 82A2) (WKN: A2DFY5) (OTC: ASDZF) is pleased to announce that it has received more detailed geological logs for the Birch kimberlite. The core has been logged in Yellowknife by Dan Gainer, P. Geo. A geologist who is familiar with kimberlites. Dan has recognized two kimberlite types in the two drill holes drilled at Birch.

Buddy Doyle VP of Exploration said, “Coarser grained kimberlite with mantle derived minerals has a higher probability of containing diamond than the finer grained mantle mineral poor kimberlite, so we would expect Kimberlite 2 to have the best potential. The photos in figure 1 show examples of the mantle minerals”.

Table 1 summarizes the geology from the 2 Birch kimberlite holes, the first drilled vertical and the second drilled to the east at 82.2 degrees dip from the same location.

The kimberlite NQ size drill core was mechanically split and half of it was sent to CFM laboratories in Kelowna for caustic fusion. Table 3 lists the samples sent to this laboratory. The portions of the two kimberlite types from the two holes are 50/50.

Samples were sent in 8kg charges (which represent approximately 4.3m of core separated by geology where possible). The lab began processing 12 days ago which has a rate of 3 samples every two days.

Figure 2.
Images of the kimberlite core from the Birch Kimberlite

The company also received the final ground geophysical data from around the Birch discovery a figure 3, summarizes these results. The Birch kimberlite occurs to the SE of the Black Spruce Kimberlite discovered in the 1990’s by drilling a prominent magnetic low. The black ellipse in the figure outlines that magnetic anomaly and is our best guess for its location. In the figure the ground Ohmmapper survey that measures resistivity, the colours highlight the more conductive zones as the “hot” red/magenta colours. The Red ellispses are anomalies generated by a ground gravity survey (Gravity lows). The data suggests the Birch kimberlite is a 150m long ellipse as defined by the gravity and EM. The other red ellispses are secondary gravity anomalies. 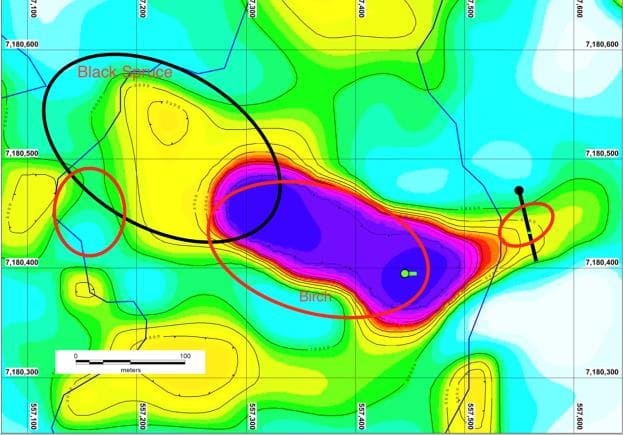 Figure 3. Ohmmapper ground EM survey results: Arctic Star drill holes shown by the green dot, (DG-2021-01 and 02) and the black drill trace is DG2021-03 which intersected a kimberlite dyke. The Black ellipse is the Black Spruce Kimberlite, defined by a magnetic low. The red ellispses are ground gravity anomalies.

The Qualified Person for this news release is Buddy Doyle, AUSIMM, a Geologist with over 35 years of experience in diamond exploration, discovery, and evaluation. A Qualified Person under the provisions of National Instrument 43-101.

Arctic Star is a dedicated diamond explorer. It recently discovered 4 new kimberlites in Lac de Gras area NWT on its Diagras Diamond Project next to the producing Diavik & Ekati diamond mines. The Company also owns 100% of the Timantti Diamond Project near the town of Kuusamo, in Finland, with several diamondiferous kimberlite discoveries. The Company also has a joint venture of the drill ready diamond exploration properties in Nunavut (Stein).