The discovery was made by testing a Class B type kimberlite target from wide helicopter supported EM survey on the Diagras project and from ground geophysical follow-up. The Class “B” targets are the 25 known kimberlites on the property. The historic exploration tended to assume these kimberlites were classic single event, vertical, “carrot shaped” pipe like bodies as dictated by the kimberlite model. However, experience in the Lac de Gras kimberlite field, (an 80km by 120km ellipse containing >200 kimberlites of similar age), has demonstrated that many of the kimberlites are not single, but multiple eruptive events with multiple lobes forming complexes, with complex shapes. The Class B style target has been the focus of our exploration to date and in 2021 it led to the discovery of 5 new kimberlites, including Sequoia, confirming the concept.

In this case the Arbutus kimberlite was discovered by drilling a distinct magnetic low SE of the known Finlay Kimberlite. Early description of the kimberlite is that it is a Coherent kimberlite with coarse sub centimeter olivines and abundant diamond and mantle indicator minerals and example of which is shown in Figure 2. From the drill intercepts and geophysics the pipe appears about 200m long and 25m wide. 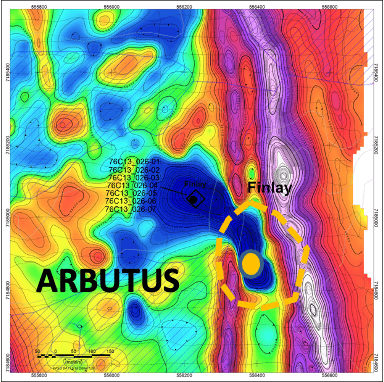 Figure 1: Ground Magnetic gridded image showing the anomaly of Finlay, dark blue and Arbutus a magnetic low SE of Finlay (also dark Blue). Several drill holes were completed historically into Finlay, by De Beers in the 1990’s. The black dot is the collar of the De Beers holes, the Orange dot is the collar location of the JV’s Holes 210m distant. 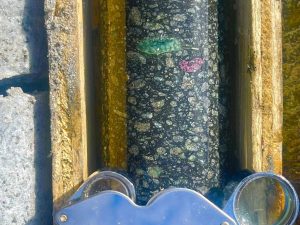 Figure 2: An example of the Coherent kimberlite recovered from drilling the Arbutus Kimberlite, note the Chrome Diopside (Green) and Garnet (Burgundy Red) prominent indicator minerals, with abundant coarse olivine in a dark matrix.

The technical information included in this news release has been prepared, supervised, and approved by Buddy Doyle, AUSIMM, a Qualified Person under National Instrument 43-101. Mr. Doyle is a Geologist with over 35 years of experience in diamond exploration, discovery, and evaluation.