Vancouver, British Columbia – Arctic Star Exploration Corp. (“Arctic Star” or the “Company”) (TSXV: ADD) (Frankfurt: 82A2) (WKN: A2DFY5) (OTC: ASDZF) is pleased to announce it has received the first diamond results from its Spring drilling program where 5 new kimberlites were discovered. The first results are from the Sequoia kimberlite complex and are described below in table 1.

Notes on the results: The kimberlite was sent to SRC laboratories of Saskatoon by chain of custody. SRC is an independent laboratory that is SCC accredited, ISO/IEC 17025. The samples are assayed using the caustic fusion process, where up to 8-kilogram samples are fused in a kiln containing caustic soda at temperatures of >500oC. The hot residue is then poured through sieves and the remaining material is then chemically treated to reduce the residue to a manageable size. The residues are then observed and the diamonds are recovered. The lab adds unique diamonds to each sample which are recovered as part of a quality assurance program.

The Spring drilling program was designed to discover as many new kimberlites as possible within the given time and budget. The idea was to tag the kimberlite with one or two drill holes and return to them for further work if diamonds were present. Arctic Star has successfully shown the existence of the large kimberlite complex at Sequoia and we now know that it is significantly diamond bearing. Further work is therefore warranted.

Notable from table 1 is the contrasting diamond counts between drill holes 04 and 05. Drill hole DG2021-04 has almost twice the diamond count of 05, indicating variable diamond grades within this large kimberlite complex. Figure 1 shows the location of the two drill holes, with a background of the gravity anomaly thought to map the complex. The two holes were drilled 220m apart into contrasting parts of the complex.

The lab has given descriptions of a dozen of the larger diamonds. They are all reported to be white in colour. The majority, 75%, are described as clear, the rest are described as off white or cloudy. It is too early to say much about the quality of the diamonds. What can be said is that it is more encouraging to have clear white stones than to have the majority of the diamonds described as boart. There are no brown or boart stones noted from these samples. The Quality of diamonds is usually determined from a large sample of commercial sized stones gathered in a bulk sample. This is a task for the future.

Patrick Power, President of the company said, “These results showing that the Sequoia kimberlite complex is diamond bearing, in particular the high diamond counts from Drill Hole DG-2021-04, are very encouraging. On this basis, the company will present to the JV a Summer/Fall 2021 exploration budget with plans a return to the field and drill test this target further. These plans would be modified to include testing other kimberlites if we get further encouraging diamond results.”

The next step would be to drill test all the sectors of the Sequoia kimberlite complex with several drill holes to understand the geology and diamond distribution. Figure 1 shows areas that need to be tested with orange brackets. This would allow for further focus (more drilling for tonnage and bulk samples for grade and price) on the higher diamond count portions of the complex in the future, if warranted. Ideally, each 15 million tonne portion of the complex would need 2-3 holes into it, before garnering an initial understanding of the geology and diamond distribution. 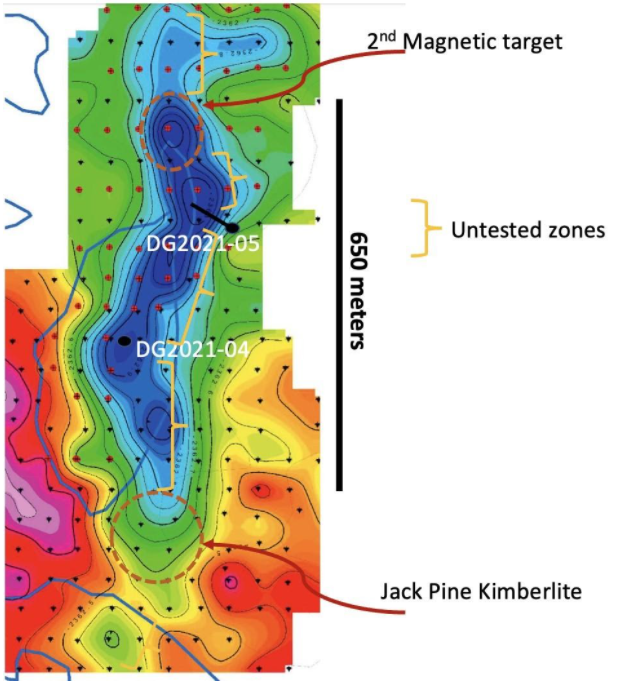 Helicopter supported drilling at the Sequoia target is possible most times of the year (Nov-Jan not recommended due to darkness, limiting aviation), as parts occur on land or can be drilled from the shore using angled holes and could commence on financing. The target is only 6.2 kilometers from the exploration camp.

The Diagras project is a Joint Venture between Arctic Star and Margaret Lake Diamonds Inc. (“DIA”). Arctic Star took over management of the Diagras project this year and proposed a $2.1 million “spring 2021” budget to drill geophysical targets on the property. At the end of this budget period, July 31st, 2021, the ownership will be approximately 80% Arctic Star, 20% DIA. A new “Summer/Fall” budget which will include further drilling at Sequoia, will be discussed within the JV in July.

The caustic fusion diamond results from the other kimberlites discovered are awaited and are expected in the next 3-6 weeks.